In the current era of fast-paced changes and divisive news, we need moments to step back. Recently launched, the little unusual game of Shrug Island - The Meeting, is an invitation to slow down, breath and build visions that go deeper and further.

After many long years of development our first game is now available for PC and Mac desktop computer on Steam and Itch.io! It’s a warmly wistful adventure and celebration of music, mystery, and nature’s dances, a +/- 90min experience of the meeting of two friends in a family of shapeshifters. Wander along with them as they answer the call of the ancient ones, re-assembling the puzzle of their world and its song of their path towards each other.

This first game chapter is a part of a larger abstract narrative in the world of the Shrugs, a heartful environmental fantasy that's seen many versions and aims to continue in playful art, music and other forms. Within our tiny team we span different generations, countries, identities and backgrounds. Shrug Island is a reflection of our common denominators, a bridge of reimagining. It holds an imperfect and personal essence we wanted to see more in games and media in general.

Look into Shrug Island, and share it with games-curious dreamers and movers in your networks. Find a restful moment to explore its nature puzzles and even better, a loved one to share them with you. As the Shrugs shift into this new phase of spreading their wings, follow us on social media and we’ll keep you posted on their whereabouts and various forms. Thanks for staying with us.

We're delighted to announce that May 9 is the release date for Shrug Island - The Meeting on Steam and itch.io. We've made this release trailer to celebrate, featuring the voice of Lukkif. If you can, watch it full screen and with headphones.

Happy New Year from team Shrug. Alina has written a Holiday Wrap Up for you on what we've been working on this past year and our progress on the game. There are lots of lovely pictures, like these Shrug-themed hand-painted stones she made on her breaks from Photoshop. Read it on our Kickstarter Update page.

We’ve been admiring the Boston indie scene from afar, so we were delighted to be selected to showcase Shrug Island at the Boston Festival of Indie Games. The festival featured 50 digital and 50 baord games, and everyone involved and attending the festival was enthusiastic and friendly. The sense of community and mutual support was evident. To top off the weekend, Shrug Island won the award for Innovation in Art and Narrative, known in the local dialect as a Figgie.

Throughout the showcase we enjoyed watching people play Shrug Island together. They would share the mouse and discuss the game as they went along, though as seen below, not necessarily following each other's advice. 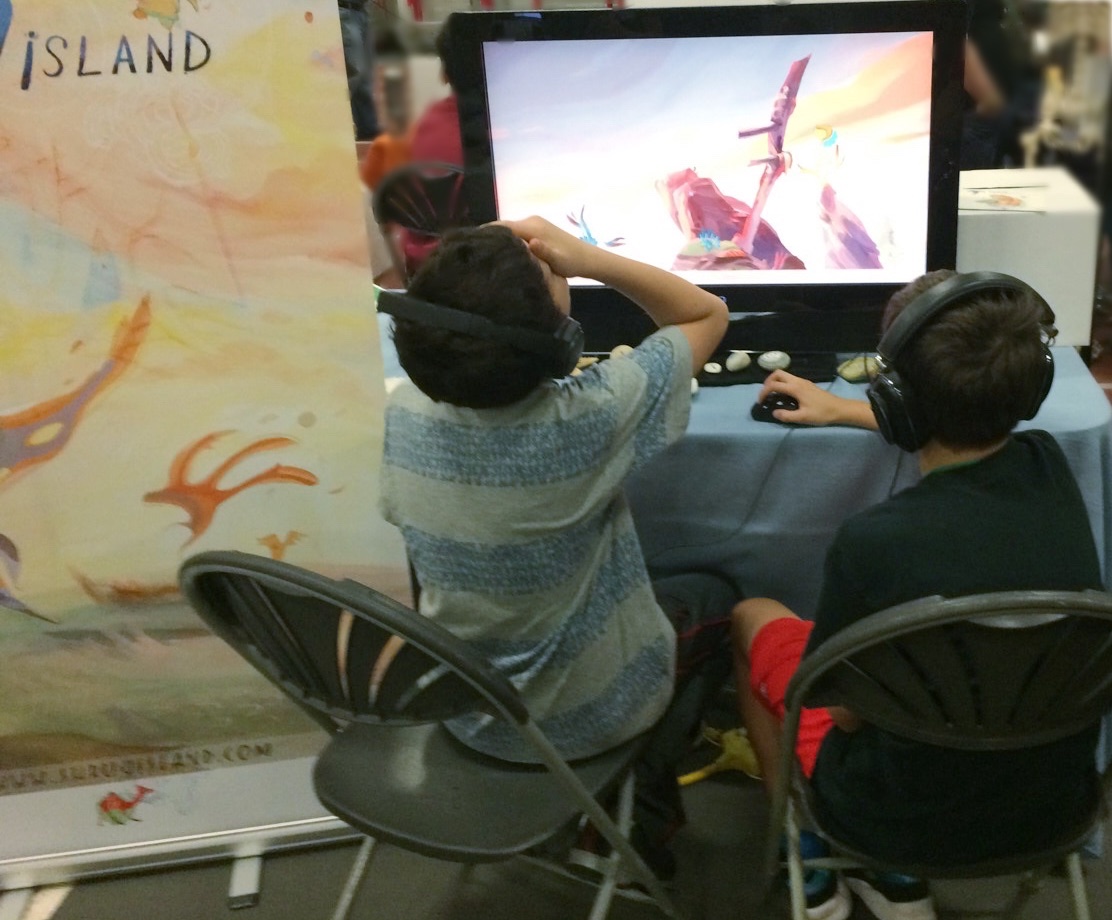 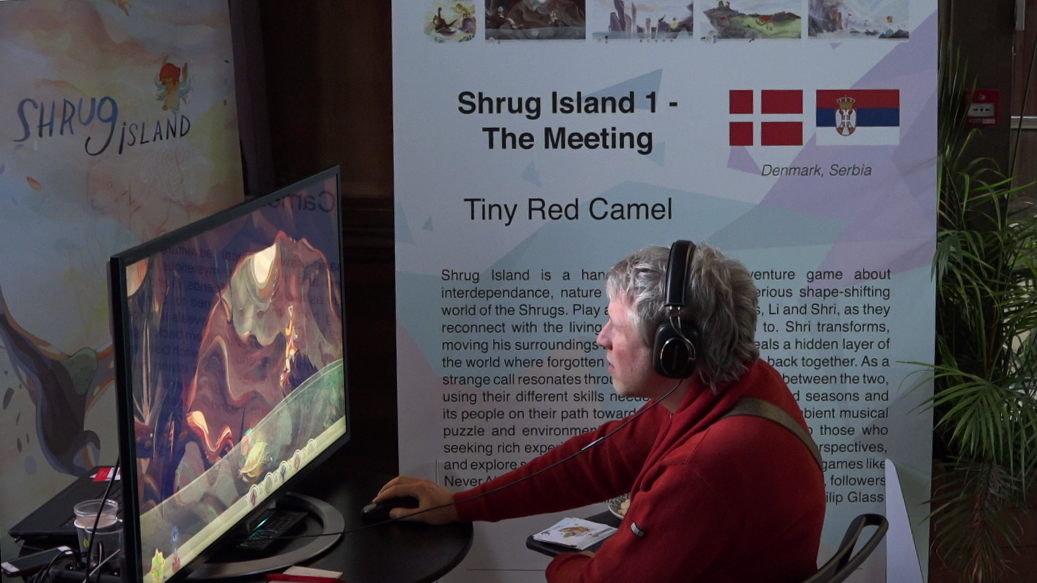 Shrug Island - The Meeting, had the privilige of being selected to showcase at IndieCade Europe and the honor of winning the festival's Developer's Choice Award. We were delighted to meet such inspiring independent game developers, researchers and supporters at the event. It's a great motivation to be part of a community of passionate people dedicated to making a difference through this medium as we move into the last stretch of development. 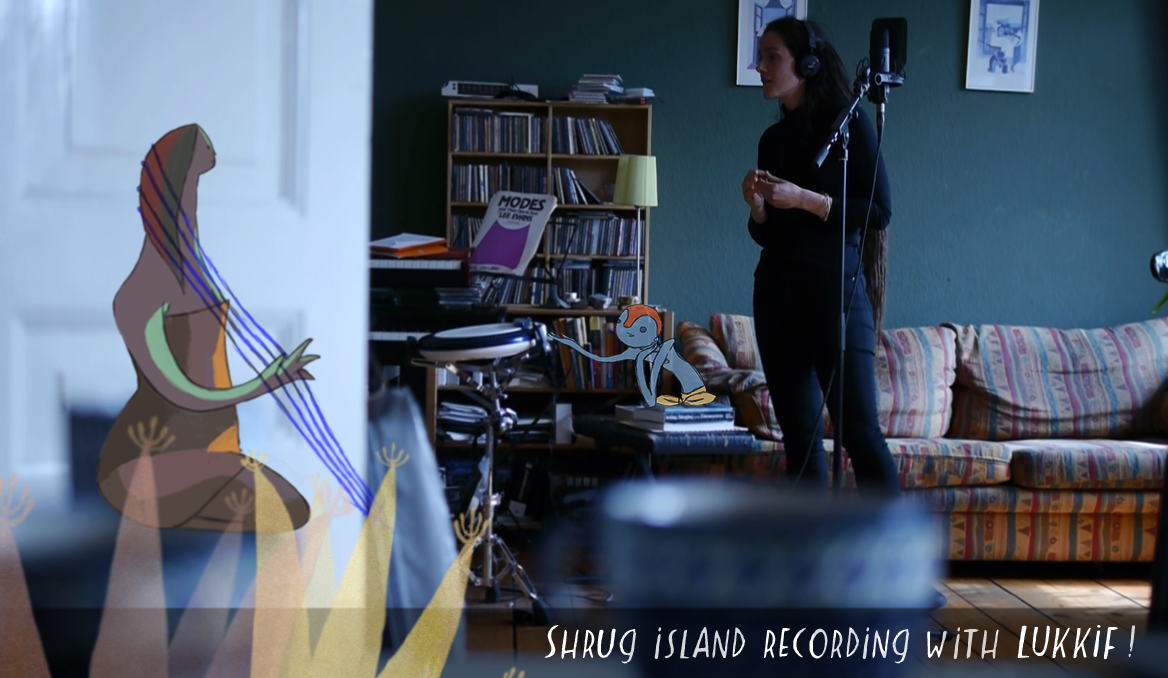 We're delighted that Shrug Island will be featuring the voice of the Danish/Norwegian artist Lukkif. From a recording session and improvisations together, Michael is constructing elaborate harmonies to weave throughout scenes and our main character's Li’s vision mode in the game, to evoke the powerful subconscious and dream layers of this world. Vocals of the North return to the Island… 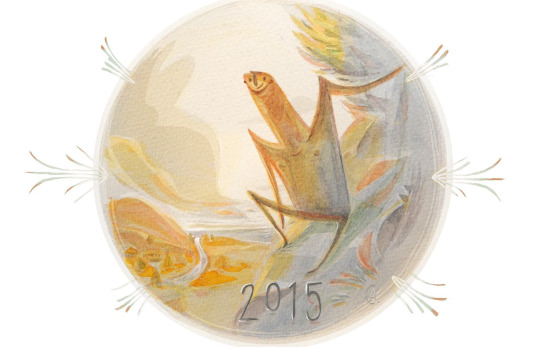 Do you want to see your animations dance to life in a game?
Try your concept skills on nature based puzzles and silly characters?
Or take on challenges of promoting a crowdfunded product in the changing landscape of games?
Apply for an internship at Tiny Red Camel, with a focus on 2D Animation, Concept Art or PR/Creative Production!

Shrug Island, a 2D musical adventure game ‌in four chapters, is produced by Tiny Red Camel, a Copenhagen based indie studio with funds from Kickstarter and the Danish Film Institute.
The game follows the seasonal adventures of the Shrugs, shapeshifters that use music to communicate with a constantly changing Island.
Players combine two little Shrugs with different skills who keep the seasons turning, help their unusual family keep the magic alive, and unravel the secrets of Shrug Island.
Chapter 1 introducing the game world and it’s characters will be released in the summer of 2015.
Chapter 2 reveals the mysterious Watcher, the fun-filled village and a strange quest for musical lunch.

Long internships may be offered an ecovillage inspiration tour/ workshop in clay building! Further job possibilities will open in the fall of 2015.

Internships are set between July and October 2015.
Locations, duration and periods discussed on an applicant basis.

Send questions and submissions to alina(at)tinyredcamel.com